The national carrier of the United Arab Emirates, Etihad Airways, will launch services from Abu Dhabi to Belgrade. Flights are to be inaugurated as soon as possible, within the next two months, no later than June. Jat Airways will codeshare on the service. As EX-YU Aviation News learns, the two airlines worked throughout the weekend, signing the codeshare agreement on Saturday. During this week the two will finalise their codesharing arrangements on other flights. Etihad will codeshare on several Jat Airways flights beyond Belgrade, while in return the Serbian carrier will place its “JU” code on several Etihad flights out of Abu Dhabi.
The two airlines are speeding up cooperation ahead of a visit by Etihad Airways CEO James Hogan to Belgrade next Monday, April 15. Mr. Hogan will sign a memorandum of understanding for a strategic partnership agreement with Jat. The national carrier of the United Arab Emirates has been offered a 49% stake in Jat over the next five years with the possibility to extend its control over the airline for a further five years, until 2023. Etihad’s takeover of Jat would be carried out in a similar fashion to its takeover of Air Seychelles. Etihad will be required to renew Jat’s aging fleet.
Click to expand... 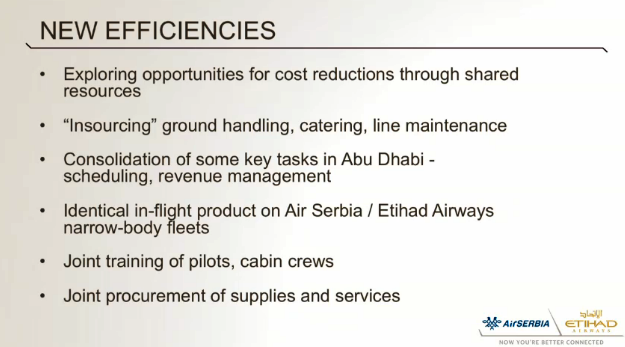