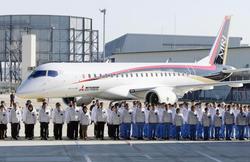 Sat, Oct 18 2014
By Tim Kelly
NAGOYA (Reuters) - To the sound of drums and a children's choir, Mitsubishi Aircraft on Saturday rolled out Japan's first commercial jet in half a century, amid doubts it can attain an ambition to sell more than 2,000 aircraft in a competitive market segment.
Developed by a subsidiary of Mitsubishi Heavy Industries that includes Toyota Corp as a shareholder, the $42-million regional jet, with just under 100 seats, is Japan's second bid to break into the commercial aircraft market.
"This has been a long-held dream of ours, and one that all of Japan has waited for," Hideaki Omiya, chairman of Mitsubishi Heavy, said at a factory in Nagoya in central Japan, which was also the site of the roll-out, 75 years ago, of the prototype of the World War Two-era Zero fighter plane.
The ceremony, attended by about 500 people, kicks off a sprint to complete flight tests before the first delivery of the aircraft in June 2017 to ANA Holdings Inc.
That target is three years later than initially planned.
Japan failed in its last attempt to break into the commercial aircraft market in the 1960s, with a 64-seat turboprop dubbed the YS-11. Only 182 planes, built by a consortium that included Mitsubishi Heavy, were ever made.
Mitsubishi has so far won 191 firm orders from customers including U.S. regional groups Trans States Holdings and SkyWest Inc, and Japan Airlines Co Ltd.
Analysts say the figure is less than the several hundred planes it needs to sell to break even and far behind the orders it needs to overtake the market leader, Brazil's Embraer SA.
That goal presents a "significant challenge," Rob Morris, head of consultancy at aviation market specialist Ascend, said before Saturday's ceremony.
The MRJ's biggest selling point, Mitsubishi says, is its ability to burn a fifth less fuel than aircraft of similar size, thanks to new-generation engines from Pratt & Whitney, a subsidiary of United Technologies Corp.
"With the rollout we are moving from a concept on paper to actual testing of real aircraft," the MRJ's chief engineer, Nobuo Kishi, said in Nagoya, when asked what was the biggest challenge facing the development team.
The current development budget of around $1.8 billion does not account for the costs of delays so far, Kishi added.
CHALLENGING NUMBERS
Mitsubishi, which is also challenging Canada's Bombardier Inc, estimates demand for 5,000 regional jets over the next 20 years, of which it aims to capture a half. Ascend puts its prospects closer to a fifth and forecasts a market for 4,071 jets worth $128.3 billion by 2033.
Embraer will supply 2,489 of those and Mitsubishi 913, with Bombardier and newcomers from Russia and China making up the rest, according to the Ascend Flightglobal Fleet Forecast.
Mitsubishi's problem is Embraer's headstart of more than 1,000 aircraft orders, along with an established reputation for financing, reliability and after-sales service, said Richard Aboulafia, vice president of analysis at consultancy Teal Group.
After the MRJ came into the picture, Embraer said it would upgrade its E-Jets with the same fuel-efficient Pratt & Whitney engines under the name E2. These will be delivered from 2018 only a year after the delayed MRJ.
"The E-Jet E2 will produce economics every bit as competitive as the MRJ, despite the lack of clean-sheet design," said Morris.
Mitsubishi has a better chance of displacing Bombardier, which has bet big on developing its CSeries to break into the market for 150-seat aircraft at the expense of its CRJ regional jets, said Aboulafia.
INDUSTRY AID
The MRJ's biggest success could be helping Japanese industry win component deals because it will prove to Boeing Co and Airbus Group NV that Japan is capable of taking on more work. Doing so could help make up for less work building military aircraft.
Skills acquired on the YS-11 program helped Mitsubishi Heavy and other companies forge ties with Boeing, a major comeback step for an industry dismantled during the U.S. occupation after World War Two.
They have a major work-share on the U.S. plane maker's 777 and 767 aircraft and build 35 percent of the carbon composite 787 Dreamliner. That work employs 22,000 people or two-fifths of Japan's aerospace engineers.
A government official overseeing Japan's aerospace business who spoke to Reuters likened the MRJ project to a 1,000-year-old Shinto renewal rite at the Ise Grand Shrine in central Japan near Mitsubishi's MRJ plant. Shrine buildings are razed and rebuilt every 20 years to pass on traditional building skills.
"A regional jet won't be nearly as important, in terms of profits and technology development, as Japan's hugely important role as an aerostructures provider, particularly to Boeing, " said Aboulafia.
(With addditional reporting by Siva Govindasamy)
Click to expand...